This is an encampment game.
A side dominating the space wins.

Hanamaru the younger brother of Usainu is jumping and hopping in a space freely and easily. Hanamaru is the very the other side of this game. Could you try to inflate a balloon avoiding Hanamaru?
If Hanamaru feels the narrowness and difficult to jump and play any more, he hangs out a white flag. If so, you win.

If you touch a screen, a balloon generates centering on there. And if you keep touching just as it is, the balloon keeps inflating until you release your finger from the screen.If a balloon becomes a certain size, it can fix to the space and will deprive the freedom of Hanamaru. 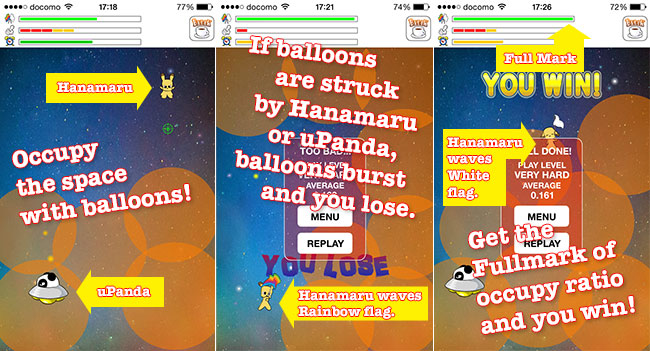 If the difficulty level becomes to MEDIUM mode and more, uPanda, a member of the family, aboard the UFO appears as a bother character. If inflating balloon touches to him, it bursts and you lose. Movement of uPanda UFO becomes to complicate as difficulty level increases.

The higher the degree of difficulty, the shorter time limit.

Come on, let’s aim at the balloon occupy master!

The YouTube video embedded in the left is what It has taken from playing this game actually.

Video begins with EASY mode immediately after app has been installed.
EASY mode is cleared in a single, next MEDIUM mode is played.
The first time In MEDIUM mode, Hanamaru makes the balloon burst before uPanda appeared.
you will be able to see what uPanda in the second time,
however balloons is allowed to rupture by Hanamaru again.